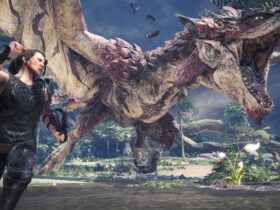 How long is Monster Hunter World?

Also Is the new Monster Hunter co-op? The Co-Op Experience

Can you play Monster Hunter world with 2 players? There is no way to play Monster Hunter: World split-screen with another person on the same console. This means that players who wish to hunt monsters with one another will need two separate consoles, individual accounts, and two copies of the game – whether that’s digital or physical is up to them.

When can you co-op Monster Hunter world?

Here’s some rules to keep in mind: Your friends will only be able to join missions if they’ve already reached that mission in their own version of Monster Hunter World’s story. So for instance if you’re a Rank 6 hunter and tackling a Rank 6 quest, you won’t be able to invite your newbie Rank 2 buddies to join you.

as a matter of fact Is Monster Hunter a good co-op game? The Monster Hunter series delivers a great co-op experience once again, but Rise has a few traits that set it apart from its predecessors. … For many players, though, any new Monster Hunter title means just one thing: hours and hours of content to play together with a group of friends.

Do you need Nintendo online for Monster Hunter Stories 2?

– You can check which version you are currently using by navigating to the Stories 2 icon on the HOME Menu of your Nintendo Switch and pressing the + Button. – Online gameplay requires a Nintendo Switch Online membership.

Can you play as a girl in Monster Hunter Stories 2?

Once players boot up Monster Hunter Stories 2: Wings of Ruin, they will have the opportunity to create their own main character. Not only will they be able to choose gender, but they can customize the hairstyle, face shape, and plenty of other little details to truly make their character their own.

Will Monster Hunter Stories 2 be on mobile?

And, sadly, the answer is probably no. Monster Hunter Stories 2: Wings of Ruin is a sequel to the 2016 game which only released for Nintendo 3DS and later on iOS and Android. It was never brought to any other consoles.